POWER TO THE PEOPLE WITH PRACTICAL BEER ANALYSIS

On an evening in June 2021, brewers from around Denmark met up at Amager Bryghus near Copenhagen to discuss all things brewing over beers and food. Together with co-host FOSS, the brewery ensured that the beers were flowing and together with some good food, a short presentation, and a healthy discussion, brewers and industry came together in a face-to-face COVID-friendly forum to discuss new tech and progress in the craft brewing industry.

At the centre of attention, a handy new beer-testing instrument called the BeerFoss FT Go was on show as a potential treasure trove of data for controlling the quality of wort, fermenting beer and beers.

The brewery’s first encounter with the new solution was over a year earlier when it was put on trial as an alternative to existing test methods. These were diverse, labour-intensive and prone to human error. For instance, it was often necessary to take a whole litre of sample from the wort or beer to get a density measurement, and this would involve degassing the sample in just the right way before it can be tested. More advanced solutions were tempting, but represented a significant investment and then still required special training of staff and a special location to install instrumentation. Alternatively, sending out tests to an external laboratory involved waiting time for results and high running costs.

Insight at the touch of a button

Easy and quick to use, the new instrument soon became an established “go-to” piece of equipment for regular quality control while also encouraging brewers to push their boundaries through the availability of reliable multi-parameter test data.

“So many materials and processes are involved in making beer - the possibilities are endless,” says co-founder, Morten Valentin Lundsbak. “This is a playground for creative people.” He explains how the new analyser has become popular with brewers because they don’t have to guess or wait for important information. “It lights a fire,” he says. “It helps us to be better brewers. The data help us to be a better brewery.”

Today, the instrument is in regular use with several tests performed every hour. Typically, samples are taken from cooled wort before it goes into fermentation and then tests are made as fermentation progresses and, finally, on the finished beer before it leaves the brewery. The tests only involve a small amount of sample of no more than 10 ml, so wastage is very low compared to traditional tests.

Another craft brewery that has discovered the advantages of the rapid multi-parameter tests is Landgang Brauerei in Germany, where the efficiency of the new solution was immediately apparent.

The popular brewery is seeing significant growth, and there is little time for brewers to spend on anything other than meeting production goals. The speed and convenience of the analyser has transformed analytical operations. Sacha Bruns, co-founder and brewer, comments: “Before we analysed the beer traditionally, degassing, filtering and so on. It was more complex and much slower. We just needed much more time and we used hobby brewing devices, which was annoying and not so accurate.”

BeerFoss definitely helps to improve quality,” says Sacha. “Because I have constant measured values and high measurement accuracy, I find deviations relatively quickly, which previously happened either too late or the results couldn’t be determined before to the right degree of accuracy.”

Simple to implement solution built on proven technology The BeerFoss™ FT Go follows in the slipstream of popular and renowned analytical solutions that FOSS has developed for similar applications in, for example, the wine industry. The technology is based on a well-proven form of infrared analysis called Fourier Transform Infrared (FTIR), hence the “FT” in the BeerFoss FT Go name. 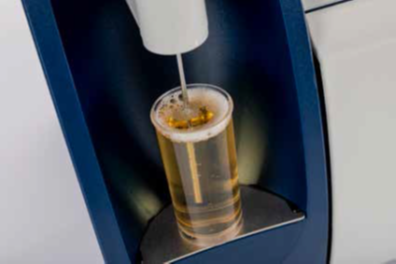 Sharing in the rapid testing revolution, Nørrebro Bryghus in Denmark can reveal how the new beer testing equipment has helped to both protect quality and boost profits at the same time.

Brewer Michael Rahbek explains how the new instrument adds value throughout the beer-making process. “I can see that I earn a lot of money on it,” he says. “I have up to five brews in the same fermenter, and it's possible to make a little change from brew to brew. I can see what my original extract is, so that it's possible to change a little bit on the malt, on the water and so on.” He describes a specific example of a wort that was too strong. Some agile brewer’s footwork allowed a rapid correction so that more beer could be made from the same brew. This is now something that is checked regularly. “It’s possible for me to get around 400 litres more of every brew and that's 400 litres directly in my pocket. Or you can say it's twelve hundred bottles,” says Michael. This ability to do quick and easy tests promotes a more assured approach to brewing, so production can be pushed closer to the predefined quality standards.

“Before I had this BeerFoss, I was on the safe side on everything,” Michael explains. “I would not have the alcohol too low. And now, with this device, it's possible for me to get very close to what I put on the label. We give our customers what they pay for, and it's possible to get a lot closer to the declared alcohol now than it was before.”

The power of practical beer analysis

The success of breweries such as Landgang, Amager and Nørrebro is part of a worldwide trend through which craft beer has emerged as a dynamic industry in which quality, creativity and topicality are keywords for success. Against this backdrop, the ability to test a range of samples throughout all stages of the process can prove a game-changer which fits perfectly with the evolution in craft brewing.

According to the U.S. Brewers Association, around 7,500 new American craft breweries were launched during the 2010s, and the industry grew from less than 5% market share to more than 13% of all beer sold in America.

Continue around the globe, for instance, with studies indicating. The growth is predicted to a growing popularity of craft beer in China.

Another development during the same decade is that the quality control options available to food and beverage producers have developed significantly. Test equipment has become easier to use, more reliable and simpler to run, for example, with developments in connectivity and networking allowing users to conduct advanced analysis consistently without need for a resident technical specialist on-site. Much of this development has already been enjoyed for many years by users in other industries such as dairy and wine, in which the accuracy, ease-of-use and speed of tests have quite literally revolutionised quality control operations.

With solutions such as the BeerFoss FT Go, craft brewers can now share in the power of rapid analysis to ensure the quality of their products without the burden of diverse and time-consuming methods. Perhaps most importantly, the easy access to reliable test data will give brewers the freedom to push their boundaries as they strive to create new exciting offerings for a growing market.

In the meantime, let’s hope that face-to-face events such as the June session at Amager Bryghus are now firmly back on the agenda as a great way for everyone to catch up with developments in the dynamic craft brewing sector.