The ability to hit butter quality targets spot-on is a matter of constant fine-tuning where small adjustments to key parameters such as fat and moisture can make a big difference to economy. A two-month trial of a new in-line process analysis solution at Agri-Mark in the USA showed that recent developments in analytical technology can yield more from the process while safeguarding strict quality controls. What’s more, the connectivity aspects proved timely by allowing off-site installation and operational support.

When it comes to the fat content of butter, there is no time to lose in finding new ways to hit quality standards more consistently. So much so that even a global pandemic could not delay the trial of a new in-line process analysis solution at the Agri-Mark butter production facility in West Springfield, Massachusetts USA.

“We make 80% butter here so obviously we want to get as close to that content as possible,” says butter processing manager Len Dion. “If you go over, your’e giving fat away, under and you’re in trouble. A tenth of a percent giveaway is significant. Depending on how much butter you are making a year, you can lose 3-400,000 dollars a year. When you make millions and millons of pounds of butter, it adds up.”

‘A tenth of a percent giveaway is significant’

In search of those small, but critical steps AgriMark got into inline analysis with near infrared (NIR) in 2017 with a solution called the ProFoss™. It led to a significant improvement in process control by delivering a regular flow of analytical results for fat, moisture and salt directly from the process. Instead of having to wait hours for results from traditional analysis methods, production staff could now track fluctuations in the process more precisely and step in with adjustments when necessary.

In the meantime, developers at FOSS were already underway with a new version, the ProFoss™ 2, which was launched in early 2021. To assess the potential, Agri-Mark took the opportunity to do a field trial of the new solution by comparing it against the existing ProFoss. The ProFoss 2 builds on the success of the original ProFoss by exploiting exciting developments in analytical technology encompassing instrument calibration, connectivity for data sharing, probe design and much more. To get a clear comparison against the original ProFoss, it was installed alongside the existing unit in the process on the same production line right after the butter churn. 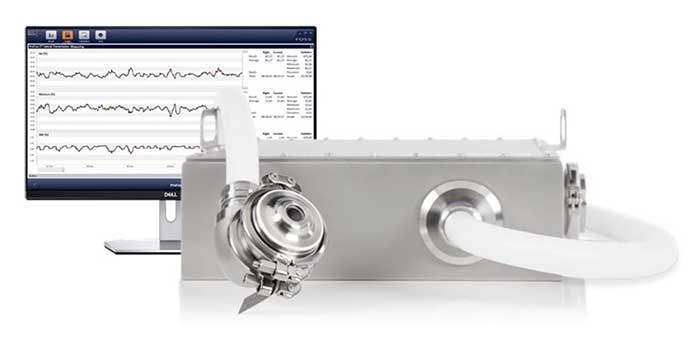 An immediate difference was seen in the frequency of results appearing on the screen in the control room. This was interesting because the frequency of results obtained from an in-line solution is critical for monitoring the small variations in key parameters with more results translating into a more precise picture of fluctuations in critical parameters such as fat and moisture. “With the original Profoss, we get results every 20 – 25 seconds, with the ProFoss 2 it is half that,” says Len.

Besides giving a more precise picture of process variations, the new solution helps to hit targets more closely because it is easier to adjust to the natural variation in raw material according to season and changes in dairy herd feed. “The software interface is friendlier and you don’t need to calibrate it so much,” Len explains. “That’s where we can react quickly, because things do change. Overall, you can run your production that much closer to 80% fat.”

To keep everything running just right, the ProFoss 2 has been teamed-up with the renowned and highly stable FoodScan™ 2, benchtop analyser. Len explains how the ProFoss 2 and FoodScan 2 communicate with each other to make both performance monitoring and calibration adjustment a simple procedure. A calibration sample is taken and ProFoss 2 sends an identity number to FoodScan 2. The operator puts that same sample in a dish runs it on the FoodScan 2. The software tracks the results for the sample and a comparison is displayed on screen. “If the FoodScan 2 is running higher or lower, we’ll make a quick adjustment by moving the bias,” he says. “You can do the checks through the course of the day and operators should do that because they are simple to do.”

As a further reference, results from the ProFoss and FoodScan 2 units were triangulated against periodic tests with wet chemistry tests. “When we compared the samples on the ProFoss against the Foodscan 2 and wet chemistry we could see how well it repeated,” Len confirms.

While the concept of in-line analysis with NIR is well proven, it is also a fact that getting a solution up and running could be a time-consuming operation and often with the need for on-site expertise. With ProFoss 2, the stable performance of the analyser unit, the performance check system against the FoodScan 2 and the maturity of the calibration models supplied all make installation and startup an altogether different experience.

In particular, the trial showed that the calibration work to tune in the solution to local samples is much simpler. With the first ProFoss it took several weeks, but with ProFoss 2, it was a matter of days. “It is a lot less complicated,” says Len. A general calibration file is supplied and you can tune it in with a few samples. You can then check it with the FoodScan 2 and wet chemistry and make a calibration.”

The costs of running an inline solution is reduced too with the check against the FoodScan 2 cutting the time and cost of reference checks with wet chemistry. Staff are freed-up to do other things and the risk of human error is reduced.

Another timely advance is the remote control and networking aspect which made it relatively simple for both Len and his team and the support team from FOSS to make the ProFoss 2 trial happen. “We did it at a tough time and online support was crucial,” says Len. “FOSS could communicate with the unit and we could track what they were doing online. It was a challenge, but it worked out well.”

The trial of the ProFoss 2 at Agri-Mark shows that inline NIR has moved into a new era where acquiring and owning an in-line solution involves a lot less work and worry for busy butter producers. Len Dion describes how the new solution offers butter producers a simpler path to improved control of key quality parameters with inline NIR analysis. “It is easier to use, the operators like it and the ability to communicate with the FoodScan 2 is great. I would recommend it,” he concludes.

The introduction of near infrared (NIR) analysis technology over thirty years ago allowed more precise control of key parameters such as butter and fat.

Benchtop instruments such as the FOSS FoodScan™ 2 have become widely established in production plants. They are nonetheless naturally limited when it comes to continuous monitoring
of production processes by the need to manually take a sample and present it to the instrument. In a high volume production, variations in critical control parameters such as moisture
can occur between measurements.

In-line NIR solutions such as the ProFoss that measure directly in the process have made it possible to move closer to pre-defined production targets without compromising quality. Key control
parameters such as fat, moisture and solids non-fat can be more closely monitored allowing
tighter production control against targets. At the same time, the performance of the ProFoss
can be easily checked against the highly stable FoodScan 2 analyser.