The practical value of DSCC for dairy farmers

A new concept allows to define four udder health groups based on categorizing cows in different udder health groups, based on somatic cell count and a new parameter: DSCC, the farmer can better evaluate and manage udder health and improve performance of his cows. This was concluded from a study among 11 pilot farms.

DSCC (Differential Somatic Cell Count) is a new milk parameter and provides additional and more detailed information about udder health, compared to SCC (Somatic Cell Count) as a stand alone parameter. DSCC is the combined proportion of the white blood cells (immune cells), polymorphonuclear neutrophils (PMN) and lymphocytes. The combined proportion of PMN and lymphocytes is calculated and presented as a percentage of the total SCC. The idea is that using both SCC and DSCC leads to increased sensitivity to detect infections earlier in udder health monitoring programmes through DHI testing. The combined use of DSCC and SCC opens up the possibility to categorise cows into different udder health groups and provides more detailed insights (e.g. cows in early stage of mastitis, cows with chronic mastitis) compared to working with SCC alone. It was further found that the performance of cows differs significantly between the different udder health groups.

Implementation of udder health groups in practise – a pilot project

FOSS, global leader in analytical solutions from Denmark, and milk testing and breeding company Qnetics in Germany collaborated closely with 11 German dairy farms from January 2020 to December 2020 to put DSCC in practice and test the concept in a pilot study. The participating farms received a new udder health report with detailed information on distribution and development of their cows among the four udder health groups once per month over a period of 1 year. The four udder health groups (UHG) used were defined as described in Table 1. These four groups are the outcome of earlier work done by Schwarz et al. (2020) and published in Preventive Veterinary Medicine. Herd sizes of the pilot farms ranged from 150 to 900 lactating cows. The herds were specifically selected based on the proportions of cows in the different udder health groups. The objective of this selection was to include herds with different udder health situations in the study so that different farm management practises and their impact on the proportion of cows in the different udder health groups could be investigated.

Move more cows into group A

Farm visits revealed that cubicle management, milking hygiene, and feed quality (as expected) represent the key factors having an impact on the distribution of cows among groups A, B, C and D. Clean and dry cubicles are associated with high proportions of cows in udder health group A and, at the same time, high performance of the cows/herd. When all the milk hygiene measures were met regarding clean udders, clean milking units, one cloth per cow, pre-milking in a cup, , and post-dipping, more cows were found in group A. It is in the farmer’s interest to have the highest proportion of his/her cows in group A. Following the initial farm visits, farmers started receiving the new udder health reports. The aim was to use this report, with both SCC and DSCC information, as a tool to evaluate and adjust management practices (such as changing bedding material or milk hygiene practices).

“The use of udder health groups and the associated report can help to make dry-cow therapy decisions for example. Cows that have been in udder health groups A (or a few times in B) during the course of lactation and then are consistently in group A towards the end of the lactation period do not need to be dried-off using antibiotics. The application of teat-sealants is sufficient in such cases because there are no indications for intramammary infection/mastitis based on the SCC and DSCC parameters”, explains Dr. Gesine Reimann, Head of DHI operations and deputy head of milk-testing laboratory at Qnetics. DSCC provides detailed information on udder health at a very early stage whereas SCC rather just shows the reaction, e.g. increase of SCC as a result of certain measures. Thus, modifications in the management of cubicles, application of teat dipping, proper function of disinfection of milking clusters between milkings of individual cows, etc. and their impact on udder health can be evaluated better than just based on SCC alone. Dr. Sonja Kleinhans, General Manager of Qnetics explains: “This could clearly be seen on one of the pilot farms with over 750 cows, where there was constant focus on improving management of the cubicles. And this resulted in a constantly decreasing infection pressure (with regard to mastitis pathogens) and thus less antibiotic treatments, less wasted milk, and a decrease of man-hours spent on mastitis treatment”.

How farmers use the udder health reports

The new udder health reports were used by the pilot farms in different ways. Dairy farmer Dirk Benkstein, Agrarproduktion Goldene Aue GmbH explains: “We use the new report two-fold: on herd level and on individual cow level. On herd level, the report helped us to optimise the management of our cubicles and maintain a high level of hygiene and comfort. This resulted in less cows in group B, C and D and more milk production per cow (i.e. kg of milk sold per cow). On cow level, we use the report to better monitor and control individual cows, mostly those in udder health groups B and D. Fresh and old lactating cows are of particular interest in this context. Those cows that had low SCC during the lactation period and fell in group A in the last DHI test before dry-off were dried off without antibiotics. Selective dry cow therapy saves us antibiotics and labour associated with their application.”

Dairy farmer Alf Jungermann from Landgut Hünstein participated in the pilot and clearly sees the benefits: “We use the udder health report to better monitor udder health in our herd. Particularly cows in group B are of interest for us because here mastitis can be spotted at a very early stage. Cows are then selected in a more targeted way (i.e. those in groups B and C) for bacteriological testing, which results in a better understanding of the actual udder health situation of the herd. We can then better decide on measures to improve udder health in our herd”. Beate Triesch, Agrargenossenschaft Groβengottern e.G. adds: “The new report opens up new possibilities to control udder health measures, e.g. changes with regards to management of cubicles. We already introduced improvements to have cleaner and drier lying areas/cubicles at the end of 2019. But based on the new report and the positive effects illustrated there, we could praise our staff and motivate them for keeping up the extra effort.” Another participating dairy farmer was Markus Trost from Agrargenossenschaft Diedorf/Eichsfeld eG adds: “The udder health situation of our herd was generally unsuspicious but feed quality was not ideal during summer. This could instantly be recognised by an increase of the proportion of cows in group B. We further noticed that some of these cows developed high SCC in the subsequent month. The new udder health report helps us to improve udder health because we are using it to detect problems earlier.“ 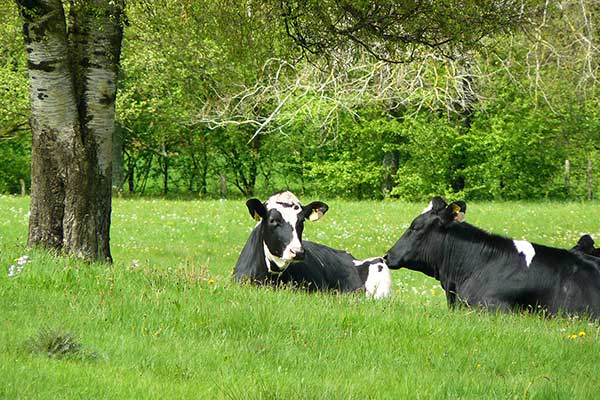 The key to a profitable dairy farm is animal health. Healthy cows live longer, have less health and fertility issues and simply produce more milk. The information in the udder health reports is very valuable for both farmers and farm employees to get herd level insights on udder health and to evaluate certain changes in bedding or feeding for example and their effect on udder health. Dr. Kleinhans: “At Qnetics we want to give our farmers the advice and tools they need to improve animal health, reduce mastitis and improve milk quality. This is why we are very excited about the new parameter DSCC that, in addition to SCC, helps to better manage udder health problems on farms, which are after all one of their biggest challenges. One concrete example is that SCC is low and unsuspicious, DSCC results can already be elevated thus indicating upcoming udder health issues. It is like an early warning system”. Dr. Reimann adds: “At our milk testing lab we have invested in the CombiFossTM 7 DC technology to be able to measure DSCC and thus provide our farmers more and better information. We want to continue working with this new and important parameter, and the experiences from the pilot phase showed us that the farmers become more and more confident in working with the new udder health reports and use them in practice. We are working on making the new udder health report accessible as an online tool and routine service. The 11 dairy farms from the pilot project will be the ones to get access first and then we want to roll out it to all of our farmers enrolled in DHI testing in Thuringia and Hesse. The farms that have not been part of the pilot study will be trained in what DSCC means and how to work with the parameter or the new udder health report”.

Read more about the Mastitis insights gained from different udder health groups and the full length insightful interview with Qnetics’ General Manager & Head of DHI operations, who have successfully implemented DSCC as a valuable tool to improve udder health management.