Soya versus insects as a protein source for feed

The prospect of using insects as a protein source for animal feed is a popular concept, but is it a realistic alternative to soya? We take a look at some of the practical considerations for the feed industry and why aqua feed can drive a greater use of insect protein.

First the spelling: is it soy or soya? Whatever you prefer, there is no getting away from the fact that soya, as we will choose to refer to it here, is a feed source rich in highly digestible protein. So much so that according to feedipedia.org, soya represents two thirds of the world’s protein source for animal feed.

Popular history points to a more humble beginning to global transport of soya as nineteenth century North American sailors returning from trading trips to China used beans as inexpensive ballast for their ships. Later, the use of soya for food and agriculture in North America became more critical during the World War II as a home-grown source of food, feed and vegetable oil.

Today, countries such as North America and Brasil have emerged as not only fully self-sufficient in soya, but as global suppliers to a protein-hungry supply chain. For others dependent on imports, worries about supply was a topic long before the current strain on supply chains caused by Covid 19 highlighted the fragility of modern feed supply.

Morten Gylling, senior advisor at the Department of food and resource economics IFRO, CPH comments: “Post World War II Europe has never been self-sufficient in protein for feed, it seems that Europe is better in producing starch than protein. Serious resources have been spent by the EU to change this, but with no success.”

What about protein alternatives?

Against this background, using insects as an alternative protein source is an increasingly popular topic in the feed industry as a glance at industry websites confirm. The European industry interest organization, International Platform of Insects for Food and Feed (IPIFF)1 has a wealth of facts in favour of insect protein, for instance, insects can contain up to 82% protein and have a diverse amino acid profile. Farming insects could limit the land use requirement for animal feed production, freeing up land to grow crops for human consumption. Further, insects can be fed on organic waste and can reduce greenhouse gas emissions from the livestock industry by 50% by 2050.

“The high content of digestible protein in insect larvae (in dry form) makes them a potent solution to improving protein self-sufficiency in animal feed,” states Joash Mathew, Scientific and Regulatory Affairs Manager at IPIFF. He adds: “Insects as feed have the advantage of already being a part of fish, poultry or swine animal diets. Numerous trials and studies on the impact of insects and their derived ingredients on the Feed Conversion Ratio (FCR) of animals reflect the positive outcomes associated with their inclusion in fish, poultry, or swine animal diets.”

The idea of insect protein clearly has momentum, yet, as with so many good ideas, a number of practical considerations appear where the rubber hits the runway.

The cost of changing to a new nutritional profile

One of the major barriers to use of any protein alternatives appears to be the different nutritional profile and the cost of accommodating this into feed production, particularly in handling the anti-nutritional elements.

Anti-nutritional factors (ANF) are substances that adversely affect the digestion of nutrients. Soyabeans have their share of both non-protein related ANF for example, phytic acid and protein-related, such as trypsin.

Ioannis Mavromichalis, of Ariston Nutrition Consulting International sheds light on the nutritional aspect of using any alternatives soya. “Nutritionally, soybean meal is number one for many reasons. It is hard to replace it due to it price and amino acid profile, and when we do, we have problems, mostly from new anti-nutritional factors, not lack of nutrients,” he comments. As an alternative protein source, insects are low in anti-nutritional elements compared to soya. According to a 2015 study2: 'Insects are rich in protein, energy, and lipids, and, unlike plant ingredients, are poor in fiber and anti-nutritional factors. Even so, after many years of using in soya as a protein source for feed the anti-nutritional characteristics are well-known and accounted for in animal feed formulations used around the globe. This can make replacement with new sources such as insects a complicated and costly business.

Mavromichalis explains that given enough time and expertise, the industry can learn to use other sources of protein, but it will require investment. “While replacement with other protein sources is possible, it cannot be achieved at a break-even cost compared to soya. I think the issue of cost is the major hurdle, not the nutritional aspect,” he concludes.

The cost issue is especially relevant when it comes to more intensive animal production where tight margins are top of mind. Morten Gylling comments: “In my opinion it is hard to imagine how we can substitute the amount of soy proanimatein with the more exotic "home-grown" proteins.” He adds: “Organic production and dairy yes, but not conventinal monogastric (pig) production as long as we keep the current level of production.”

Despite the focus on costs, bigger issues might prevail in the longer term, for instance, with recent threats to supply chain continuity prompting the EU to push harder for the long-wished-for goal of protein self-sufficiency. “In the long term, Covid-19 could be a reason for going for less import of protein (soy),”concludes Gylling.

Developments, tipping in favour of more investment in insects include the increasingly fractious arguments amongst global players about who has to buy from who and how much. Natural concerns about Amazon deforestation in connection with soya production and strain on marine resources used in fish meal feed can also weigh in favour of protein alternatives on the political playing field.

Yet, if insect protein production is to take off, legislation will need to catch up. For instance, EU legislation bans the use of proteins derived from farmed animals for use in feed for ruminant and monogastric animals. Commonly known as the EU ‘feed ban’, the legislation was introduced in reaction to the Bovine Spongiform Encephalopathy (BSE) crisis. The risk of invasive species is another major consideration for regulation of insect-farming.

A less obvious, but relevant consideration is the quality control angle. In recent decades, the use of increasingly reliable and easy-to-use analysers based on infrared spectroscopy have become widely used throughout the feed industry for routine testing of key parameters such as protein of many sample types including soya and soya meal used in so many feed formulations today.

As with the bigger issues, existing investment in soya as a primary protein has ensured that it is firmly dialed in to quality control programmes and analytical operations. Testing with infrared instruments requires data collection from both reference analysis and the sample types involved to build calibrations that reflect natural variations in samples, for example over different growing seasons and harvest conditions. Widespread testing of insects using existing analysers will require a new start in terms of calibration development involving for instance, investment in collection of different insect types and labour-intensive reference testing to build the required pool of data.

New sample types can be challenging to measure, for instance, with smaller concentrations of parameters measured and the decomposition and natural drying of harvested insects before they are moved into the actual drying process.

From a nutritional point of view, the anti-nutritional aspects of soya has complicated the use of soya as the ubiquitous protein source3 for aqua feed requiring the development of so-called protein isolate to provide an answer4. Insects can turn out to be the cheapest animal protein available. 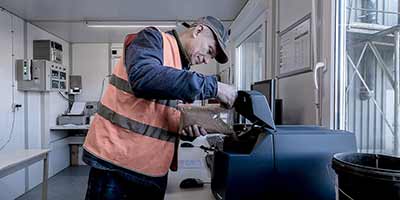 Near Infrared (NIR) analysis is a spectroscopic technique that makes use of the naturally occurring electromagnetic spectrum. 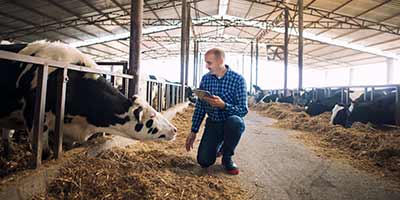 Ever since the mid 1980’s, near infrared (NIR) analysis has helped the feed industry to improve feed quality and production. 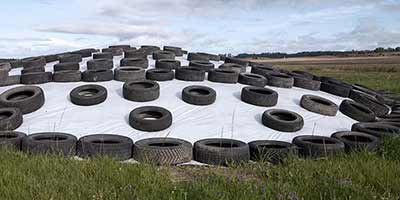 With farmers looking to increase yield in dairy cattle through optimisation of nutrition, on-farm silage testing with NIR is a valuable way of checking nutrition.