More sugar from the same cane

As we continue to discuss the levels of sugar in our diet, there’s no escaping the importance of sugar as a high-value commodity. Performing an essential role in feeding the world, more than 170 million tonnes of sugar is produced per year, of which 60-70 percent comes from sugar cane.

Another increasingly relevant topic, both from inside and outside the industry, is the sustainability foot print of cane sugar production. Making effective use of bagasse for by-product electricity production and minimising run-off of water in the process is increasingly important. Above all, the quest to get as much sucrose as possible from the whole process is top of mind for producers.

Reliable analytical data has proven significant in addressing such challenges. Today, the recent development of fast and easy to use analytical instruments presents a range of options for cane sugar producers. Among the possibilities, near infrared (NIR) analysis is a powerful tool for monitoring the quality of incoming cane as well as minimising the loss of sucrose throughout the production process. Variations in key parameters such as Pol, Brix, Reducing Sugars and Moisture can be constantly monitored against targets allowing for more efficient and sustainable production. In short, the opportunities for efficiency and profit improvement are numerous throughout the cane sugar production process.

Ensure quality of incoming cane by analysis directly on shredded/prepared cane or cane juice, get the right payment for suppliers, save time with reduced sample preparation, eliminate or reduce use of chemicals.

Results for multiple parameters of sugar cane such as pol, brix and moisture are delivered within a minute. Given the variability in sucrose content of raw material, the ability to deliver a greater frequency of measurements is a valuable way to select and make best possible use of incoming cane while ensuring fair payment to farmers.

Proven cases show that 1% more recovered sugar can lead to increased revenue of more than 400,000 Euros per year for a typical sugar mill. In the video case story included here, a user of NIR solutions explains the value of rapid NIR analysis in sugar processing.

Find more profit through in-line control of the whole process

Benchtop analytical solutions such as the NIRS™ DS3 analyser which has become widely established and relied upon for accurate and rapid measurements of key process control parameters in sugar cane processing. Nonetheless, the amount of process data available is limited by the need to manually take a sample and present it to the instrument. The introduction of so-called inline solutions such as the FOSS ProFoss™ 2 changes the game by providing direct and continuous measurements directly in the process.

By measuring directly in the process every few seconds, process variation of key parameters such as Pol, Brix and moisture can be constantly monitored against targets allowing adjustments to be made accordingly.

At the same time, the reliability of the results could also be easily checked against the highly stable benchtop analyser.

More sucrose and more power from bagasse
An application that shows the power of in-line analysis is the testing of outgoing bagasse at the diffuser. This allows tighter control of washing to maintain the optimal balance between sucrose and moisture in the bagasse.


As an example of the benefits of inline testing, let’s use the regulation of bagasse just after the diffuser as a case in point. Typically, 1000 tonnes cane gives 350 tonnes bagasse after juice is removed. The bagasse is burned to generate electricity and the ideal balance in the bagasse for this purpose is 45% moisture and max 1% sucrose.

If sucrose is higher, the mill is burning sugar. If the moisture is higher, less power is generated. Close monitoring of pol, brix and moisture with an in-line analyser gets the balance just right.

The analyser is installed close to the outlet via an optical fibre and a sample interface that is especially designed for the job. Notably, it is insensitive to vibration and can handle the complexities of the sample type.

Further, it makes use of the right type of near infrared (NIR) technology to fit with the nature of the material. In the example of bagasse, measurements are based on the latest in NIR window reflectance technology for process applications including a robust sensor with a double window system. The window into the process always remains in place while the second can be removed for service work on the sensor without interruption to the process operations.

See this video interview for an in-depth explanation of how it works.

In addition to feeding back results to a monitor in the control room, the data can be automatically fed into the PLC system. Adjustments to processing are then done automatically. Accordingly they are performed more quickly and with greater precision leading to production closer to targets with less waste and optimal profit.

A sugar mill that is reaping the benefits of closed-loop control of sugar processing is the Pitangueiras production facility in Brazil. See this video interview for full details.

In Juice clarification, frequent analysis of mud cake gives you valuable information about critical steps in the clarification and filtration steps. Likewise, in juice evaporation, you can monitor and optimise your evaporators through frequent and fast analysis of syrup. Both the mud-samples and syrup samples are measured directly without the need for sample-preparation.

Save with streamlined crystalisation and centrifugation

Fast analysis of massecuite can provide valuable information to ensure satisfactory crystallization processes with optimal use of resources. In centrifugation, fast and frequent analysis of molasses (A,B and C) as well as crystal sugar ensures that centrifuge equipment operates as planned with minimal use of power and resources. All samples can be measured directly without sample preparation. 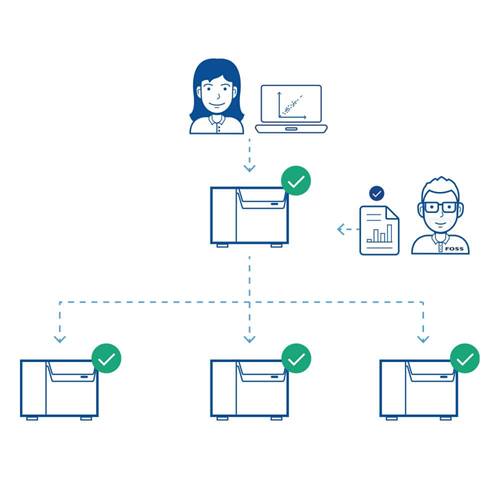 Our integrated and remotely controlled support and optimisation services ensure maximum value from all your FOSS solution wherever you are in the world. Beyond on-site maintenance, our service engineers and application specialists are always with you online. The team monitors performance status and secures that your connected analytical operations run smoothly. Our preventive maintenance warrants up-time and quality of data - day after day. Read more

Get in touch with our specialists to discuss your potential business value with no strings attached. Let's talk

Get in touch with our specialists to discuss profit and quality improvement opportunities for your specific production.